Primary Stages sat down with actor Jonathan Walker to discuss his process, his work with Charles Busch, and his character in The Tribute Artist.

What is your role in The Tribute Artist?

What were your initial thoughts after reading the play?

Having worked with Charles on five productions of two plays over the last five years, I was intrigued to play a real “down low” character rather than the clean-cut leading man thing, as well as looking forward to seeing Charles play both a man and a woman onstage. Lots of new things.

Heaven. I can’t thank him for the trust he has shown me in each part I’ve played opposite him. And he’s a good kisser.

What kind of preparation and/or research have you done for Rodney?

I wrote a great deal of “back story” material, making up a whole childhood and life for Rodney Ash as well as specifics of his relationship with Adriana. Rodney tells a lot of “fibs” so I’ve been lying to my wife as practice… she doesn’t care much for that. 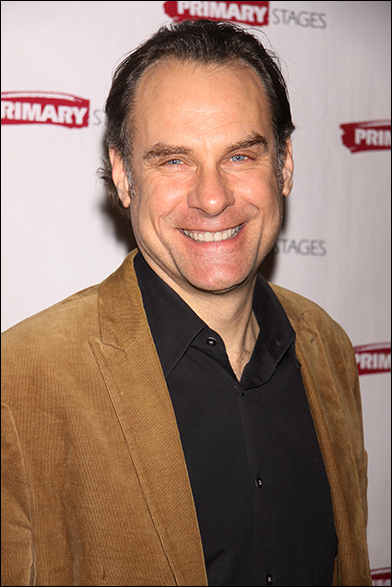 So do you see your character as the villain or antagonist? As an actor, how do you relate to playing a sort of “bad guy”?

Rodney is a victim of life’s crappy wheel of fortune. He’s a sweet, immature guy underneath it all who when he first arrives at that house feels true remorse and guilt for having dumped Adriana. He’s also damn desperate and his options in life are running out very quickly so as they say…. any port in a storm. I’d say Adriana trained Rodney to be a first class schnook (as a kid, he was a second class schnook) and he learned his lessons very well.

What inspires you as an artist? What other artistic endeavors do you pursue?

There’s nothing better than a well-written script and nothing worse than a remedial one. If they don’t write it, I can’t act it. I write, play guitar, cook many different styles of food, I’m passionate about hard cider, I like to read in bed in the morning with coffee, I go hear live music whenever I can, I’ve been an amateur photographer since I was in my early teens, I like to eat alone at restaurant bars with a book – New York City is one of my favorite places to explore even after being here for 30 years. I pursue a great deal of environmental and social issues as an advocate and gadfly, I ride my bike, travel a great deal with my wife, Jennifer Van Dyck. I love acting because it’s always different. Acting is like being a pirate… some days your boat is full of booty, some days you’re in dry dock having your barnacles scraped and other days you’re locked up in the brig! Never a dull moment.

The Tribute Artist plays at 59E59 Theaters through March 16. For more info about the show and to purchase tickets, please visit our website.